I acquired a new camera a few weeks ago to inspire me to become a better photographer.  I'm a complete novice but want to learn.  Since I never get around to posting on this blog, I decided I'd try to post a few pictures every week or so.  We'll see how motivated I stay.  So far, all my pictures have been out skiing, so that's what you're going to get for a while. 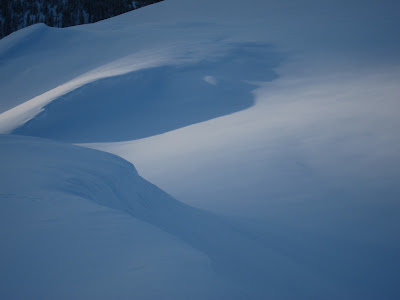 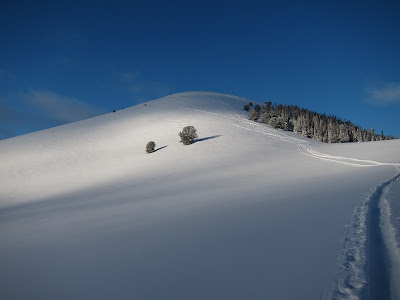 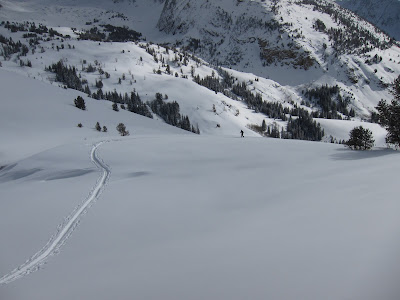 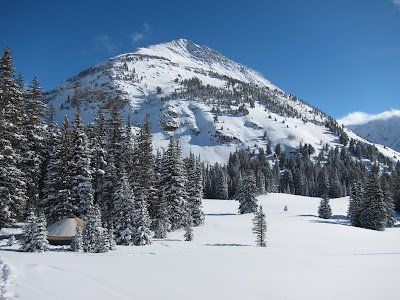 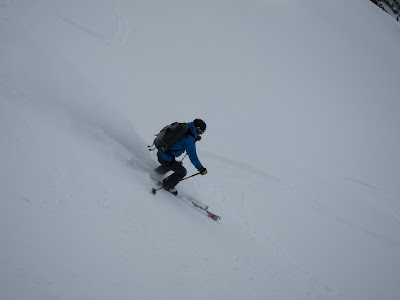 I got my period urge to write a blog post.  A successful cross season is in the books and it's time for some skiing.  I've made it out a couple of times on skate skis to remind me I still suck, but I still like it.  However, any thoughts of being good enough to have fun racing are still in the distant future.

I have been out on a number of good backcountry tours and got the year off to a good start with Tim and Mike on New Year's Day. They guided me around all day on this route. 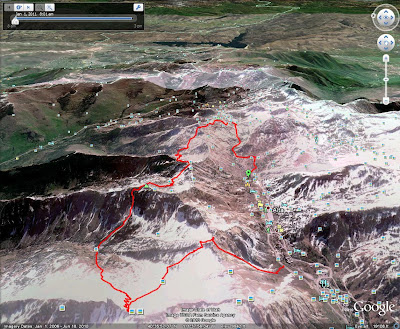 The highlight was conditions allowed us to ski the Hallway Couloir.  This was my first difficult to find, true chute and it was great fun.  A real confidence builder.  If you look close, you can see our tracks. 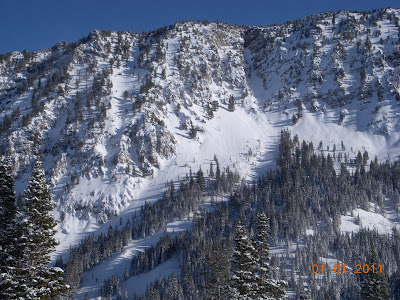 ﻿
Here's Mike then Tim in the chute. 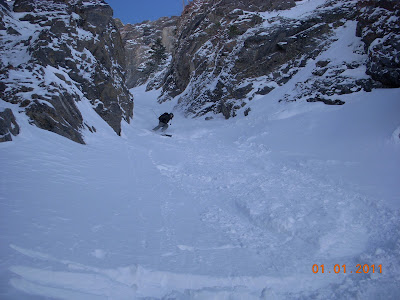 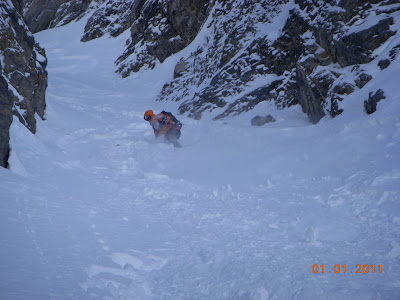 Surprisingly, the best snow of the day was the exit out from Cardiff peak﻿. All in all a fantastic way to begin the new year.  Looking forward to more to come.  Tanner's work and school schedule will now allow some touring with his dad, so it will just get better.
Posted by Daren at 9:00 PM No comments:

Last week,Mark and I were hiking on Flagstaff around sunset when the wind chill was -35.  I have issues keeping my fingers warm and was complaining a bit.  Mark said something like: "Have you noticed two of your favorite activities, skiing and cyclocross, take place in the cold.  You might want to rethink your what you like to do."  Good point.  A week after our outing, I've lost a layer of skin off the end of my nose and the ends of my fingers are still numb.  However, I still raced Saturday, twice as a matter of fact, in very cold conditions.

The smart thing would be to avoid putting myself in positions that exploit my weakness to cold.  But here's the rub, I really love cyclocross, backcountry and skate skiing.  Therefore, I'll put up with occasional numb extremities, shaking uncontrollably before and after cold, wet races and sending stupid money on clothing to keep me warm.  All this in an attempt to overcome my basic incompatibility with the cold.  And you know what, I'll keep doing it because the payoff is more than worth the discomfort.  If you're reading this, you probably understand. 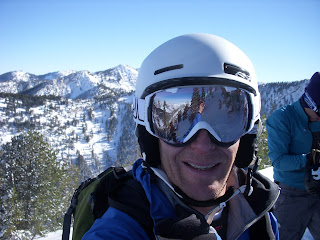 Tanner's a Vampire and Cross News 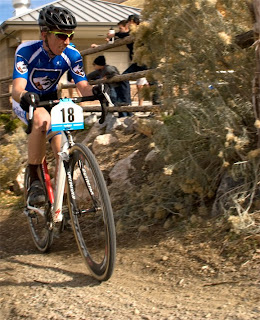 We're had our suspicions for years, but Adam's picture confirms the truth.  Look closely, under race stress, Tanner's vampire fangs are showing.﻿  This explains a lot.  No wonder a few years ago he suddenly started dropping me like a rock on all climbs.  Superhuman strength has to come from somewhere.
In other news, it's time for cross racers to turn their thoughts to Bend Oregon and Cross Nationals.  Mark, Doug and I will be making the trek this year with a trailer filled with the goods.  (Sadly the Vampire has finals at the same week.) We'll have room to haul some additional bikes and equipment.  The haul fees will be a lot cheaper than the airlines, so let me know if you're interested. 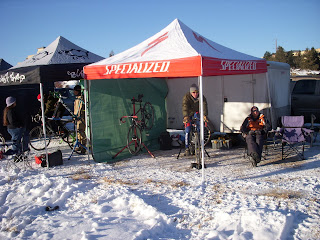 The compound will be bigger, better and heated this year.  Hopefully, we'll be able to set up next to the Church of the Big Ring crew again.  Any Utah racers are welcome to use the facilities for warm up and hanging out. 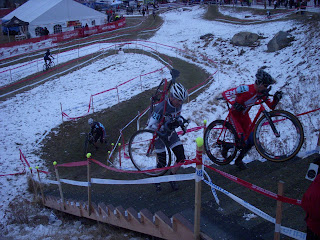 The stairs will be back again this year. 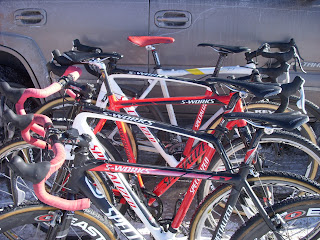 Never enough bikes around.  Can't wait.  But before the big dance, the State Championships should be good this week at a new venue with solid potential.  Might even be winter like conditions.  One can always hope.
Posted by Daren at 10:26 PM 2 comments: 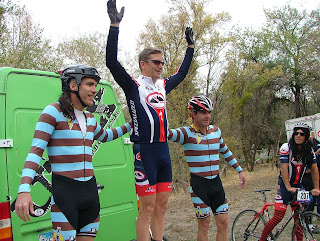 Not surprisingly, I've been thinking some about winning the last few weeks.  Winning with frequency is a new concept to me.  Prior to this cross season, here's the list of my cycling wins.  Don't worry, it won't take long to read.
I've had a couple veteran class heat wins on a cruiser BMX bike when the kids were dabbling with BMX, but no main event wins.  I raced one NORBA National veteran dual salon event and won a couple heats but crashed out of the semis (was the end of my brief gravity racing career).  That was my complete list of wins after many years and hundreds of races.  I've never come particularly close to a win on a road bike and probably never will.
Each of these prior wins was a pretty big deal to me because I knew winning was a rarity.  With this history, I'm not sure what to make of my streak of cross wins this year.  I'm the first to point out that there's a couple 45+ guys racing 35+ that are consistently faster than me.  However, being off the front of a good group of 45+ cross racers is still really cool and strange at the same time.
I've always considered myself a "slow, fast guy".  In other words, I've been fast enough to race in the fast guy categories but never fast enough to consistently be at the front.  So why do I, and for that matter most racers, race?  It's certainly not for the winning.  For me, racing has always been a battle with myself.  A race was measured by my internal effort gage.  If I gave it my best effort, the race was a success regardless of placing.  In addition, I've always been a doer not a watcher.  Participating in challenging things has always appealed to me.
Internal battles and personal challenges still motivate me, but over the years it's the MTB and Cross racing community that keeps bringing me back.  I've been fortunate to become friends with a diverse and interesting group of people I would never have encountered in my "normal" life.  I'm a better and more well rounded person because of it.
So, finally racing my age group and focusing my limited training exclusively on cross season has led to some wins this year.  I'm very much enjoying it and will do my best to win some more.  However, if I never win another bike race, I'll still show up for events because it's become part of who I am.  When people ask if I ride bikes or if I'm a cyclist, I always respond with "I'm a bike racer".
Posted by Daren at 8:37 PM 3 comments:

I must say cross racing has been particularly good so far.  Finally making the jump to my age group has proved fruitful with a few trips to the top step of the podium.  Can't complain about that.  Winning the same day as my big brother was cool as well.  However, the best part of cross season so far has been watching friends try cross for the first time and getting completely hooked.  It can't be explained, just experienced.

On a final note, this summer I discovered yet another way to to hurt myself while looking like a dork.  It's called roller skiing.  Road rash is remarkably similar whether inflicted by a fall from a road bike, mountain bike, cross bike or roller skis.  Who knew?
Posted by Daren at 10:43 PM 1 comment:

Tour of the Corn

Rather and racing my road bike at the Tour of the Depot today, I convinced Adam, Kendall and Jason to join me for the Tour of the Corn.  Our objective was the huge natural half pipe on Lone Peak's south side.  We've all looked at it for years and today we skiied it.  We made good time to the ridge and enjoyed the long ski down.  The snow was a little firm on top, but really nice corn on the rest.  Here's a few pictures from the outing.
We spend some quality time on dirt. 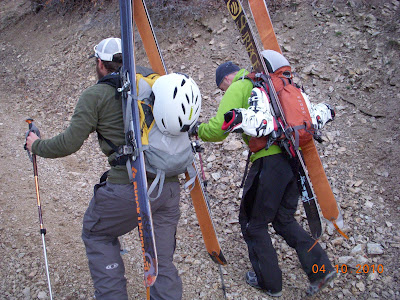 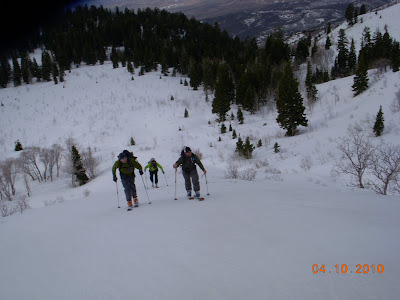 Box Elder looming in the background. 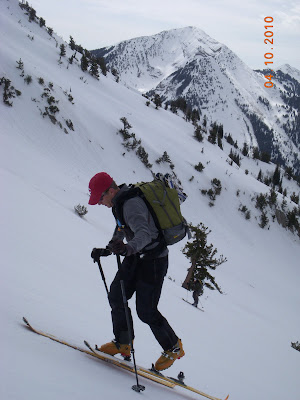 It a big, open bowl with great views. 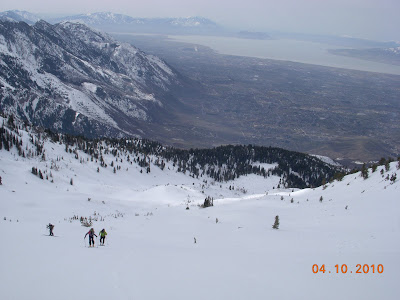 The fnal push to the ridge. 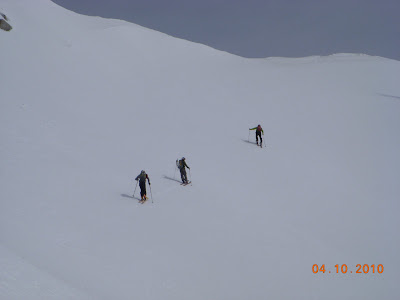 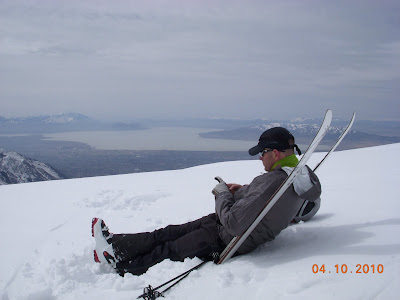 Lots and lots of turns to be had on the way down. 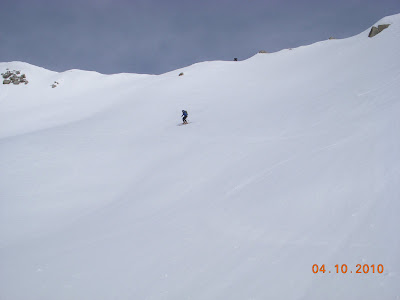 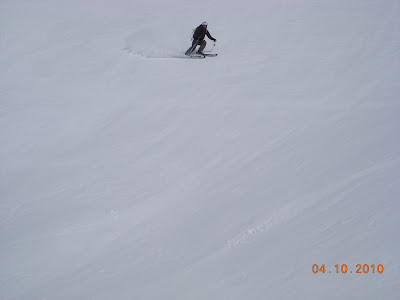 Not a bad way to spend a Saturday morning.
Posted by Daren at 3:55 PM 2 comments: