I have no shortage of things I would like to do or become. From a young age, I have often daydreamed about being something I'm not. Often, these daydreams are about some athletic achievement, but sometimes they they expand into other areas of interest. I have always secretly (well, if you know me, not so secretly) wanted to be a musician. I was blessed, or cursed depending on your perspective, with just enough musical talent to know I really like music, but not enough to be proficient without a great deal of hard work. I just never was quite motivated enough to put in the time to get really good. However, to this day I wish I could play like Dave Weckl, Carter Beauford or Neil Peart for at least a few hours.

After a failed attempt at piano lessons in elementary school (my parents gave into my constant whining about practicing) I moved to the drums in junior high. I joined the junior high band and took some lessons at school. In an act of pure parental love, my parents used some of their scarce cash to buy me a used drum kit. Then in an even bigger act of parental love, they let me play them in the house. (In case you're wondering, I am in fact the youngest child and I was spoiled. I have no problem with this fact.) Over time, the sad little kit became a sad big kit as I brought home some drums the junior high was going to toss. I dreamed of a big-hair, 70's rock band kit with more drums and cymbals than you could use.

Once I moved from home, the drum kit was passed onto one of my nephews never to be seen again by me. My desire to be a drummer lay dormant, just under the surface, for many years. It was awakened about 8 years ago when a new family moved into our neighborhood. This neighbor turned out to be a legitimate professional drummer. He had played in Vegas for years and toured with several big names. He converted his 3 car garage into the drummer's Disneyland. It contained at least 10 drum kits and every piece of percussion you can image. I quickly worked my way into his good graces and was taking lessons not long after.

In addition to teaching drum lessons, my neighbor was also a Tama drum dealer. Since I'm a hopeless gear guy and I'm incapable of passing up a deal, I acquired an electronic drum set. The plan was to play the electronic set with headphones to keep the noise down in the house. This lasted about a year. At the time, we were finishing our basement so I convinced the family that an insulated, sound dampened room in the basement would make a full acoustic drum kit tolerable. Somehow they bought the idea and the electronic kit was sold and replaced by the real thing.

Of course the kit couldn't remain small, so it grew to this over time: 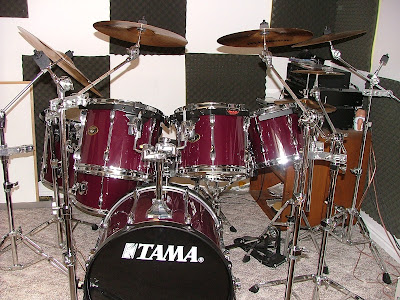 Predictably, my zeal for practice began the wane and in a few years I was hardly playing the drums at all. As our bike collection grew, I decided most of the bikes would be better kept in the house than in the garage. So, the drum room became the bike storage room and the "Pit of Despair" as The Resource User likes to call the indoor trainer set up. I needed more space in the room, but since I still harbored illusions of becoming a drummer the drum kit was downsized rather than eliminated. The result was this: 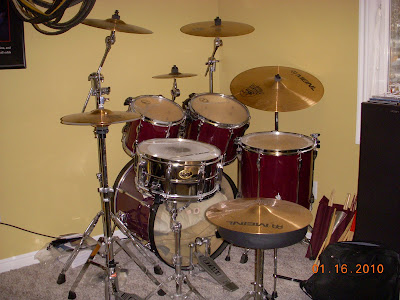 With the addition of backcountry and XC ski gear the last two years, the drum room was completely transformed into the bike/ski room and the drums were just in the way. Given that I had played the drums a total of about an hour during the last year, I listed them for sale on KSL last week. In my final concession that I would not become a drummer, I sold the kit Friday and it's gone. So after 30+ years, the dream is officially dead. A rational decision, but a sad one none the less.
Posted by Daren at 7:09 PM 4 comments:

I've never been much of an office pratical joker.  I think it's because of my general aversion to getting into trouble.  However, I work with some real Pros.  Our head Sales and Marketing guy at the Mothership has been out of town so much the last month that the Pros decided he no longer needed office space.  They took it upon themselves get rid of the space for him. 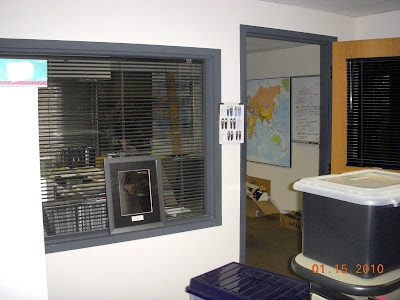 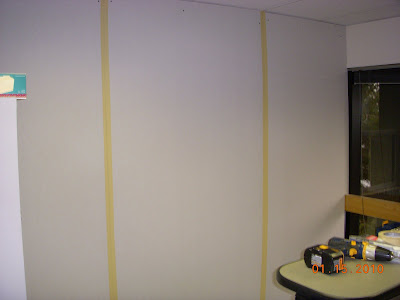 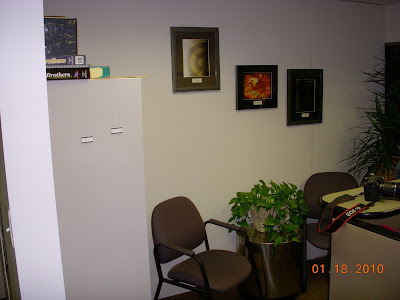 I missed the discovery when Sales Guy made it back to the office today.  However, there was hidden camera footage I'm sure I'll get to see sometime.
Posted by Daren at 8:04 PM No comments:

In October, I sent a note to USA Cycling's event coordinator regarding team parking at Cross Nationals in Bend.  I didn't hear anything until I received this Friday:

USA Cycling will be closed on Monday 18 Jan in observance of Martin Luther King, Jr Day. Will be back in the office on Tuesday. Will be checking email thru the weekend.

Have a great weekend!

I can’t seem to find any information on reserving a team parking spot for cross nationals in Bend. I’ve looked through the websites and Sportsbase on line and don’t see anything. Can you point me in the right direction?

Glad see my e-mail is still in the hopper and that Tom will be checking e-mail though the weekend.  Maybe I'll get a reply by 2010 Nationals.

The sad part is I've never been a USA Cycling basher.  However, it the last week they've become an easy target.  Is improvement coming anytime soon?  I hope so but think not.
Posted by Daren at 6:05 PM No comments:

Doing What I Should

I picked up a good old fashioned head cold a few days ago. (I'm sure the fine air quality has had nothing to do with that.) Head colds always present a dilemma for me. I feel tired and have a ton of congestion, but I'm not completely wiped out. Accordingly, I have a constant battle with myself over how much or how little I should be doing.

I know the smart thing to do is to just rest and get fully recovered before attempting anything physical. However, 47 years of living with myself has taught me I'm completely incapable of doing nothing. It's a fundamental part of my makeup and usually serves me well. As The Resource User likes to say, "You're always ridiculously productive, knock it off". However, when it get sick, this personality trait is a huge problem.

So here's the options I have before me this morning:
At this point, I've convinced myself the last option is my choice for the day. We'll see how long it lasts. At least the crappy valley weather makes the choice a bit easier. If the weather were nice in the valley, I'm sure failure to rest would be certain.
Posted by Daren at 9:02 AM 2 comments:

In case you think I made up the whole Cyclocross Nationals trip, check out what I received in the mail a couple of days ago. 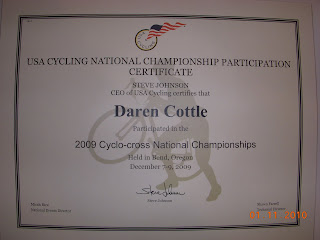 That's right, a genuine certificate of participation signed by Steve Johnson, CEO of USA Cycling and local race hero.
It's gratifying to know that USA Cycling sent this suitable for framing certification to all 2,000 participants. It was mailed in a full sized envelope with a cardboard backing to ensure it received no damage. What a great use of entry and licence fee revenue.
I'm sure Trebon's disappointment of a 2nd place finish was tempered by his certificate of participation. Page will likely display his next to his World Championship silver medal.
What a great day to be a member of USA Cycling and a cyclocross racer!
Posted by Daren at 6:27 PM 5 comments:

For both of you that read this blog, I decided to post something. I may even post more than a couple times a month, but I'll make no promises.

For many months, backcountry ski touring has been on my mind. I now have 5 tours under my belt including a dawn patrol up Day's Fork and a long tour from Big Cottonwood to Millcreek. Here's some observations from a newbie:

Tanner and I made it out with Bart and Alex yesterday for a long day of fun and challenge. Even though I was worked last night and I'm a little sore today, it was worth it. We started at the Spruces in Big Cottonwood, went up Mill D and over to Reynolds for a couple laps. Then down Watson and back up to Gobblers Knob. From there, 3,000 vertical down to Millcreek road. 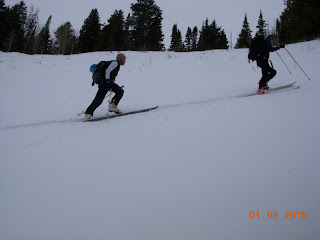 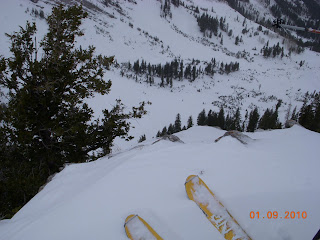 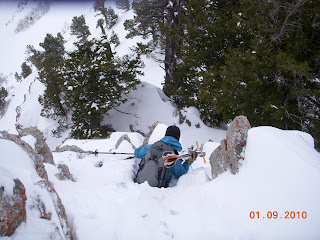 A little scrambling was required. 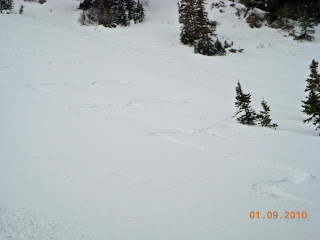 Got to lay some nice tracks. 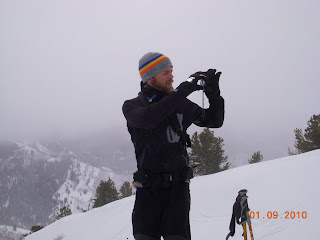 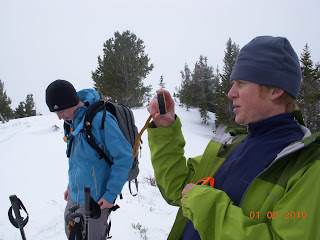 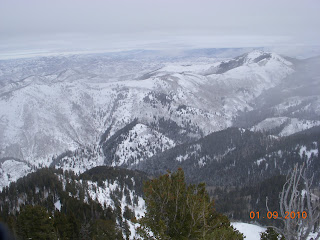 It was cloudy all day, but we did get a break to enjoy the view off Reynolds. 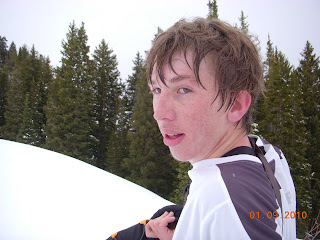 Yes, skinning up is hard work.

Thanks to all who have held me and Tanner enter this enticing new world.