Nearly 7 years ago, I took my one and only serious crash on a bike. It was at RMR, of course, on the first Tuesday race of the year. The weather was nice and both A and B groups were large (this was before the C group was around, more on that later). Late in the race, the A's passed us B's on the back side and then slowed down so the B's tried to pass the A's back near the end of the dragstip. As you can guess, a 100+ guys in two groups all attacking to get to the corner first led to two separate, large crashes. Two of us ended up in the hospital and I was lucky enough to have 2 surgeries, a cool Ti screw and 8 weeks off the bike. This particular incident led to the creation of the C group and tighter rules on who should be racing in which group.

It took me more than a year to brave RMR again and I've slowly increased the number of crits I race each year. They still scare me, but I can't duplicate the intensity any other way. This year, I've done a record for me, 14 crits. The funny thing is since my big crash, I've never felt like I was going to go down. I've been in the dirt a couple of times at RMR, but I was never in danger of hitting the ground.

Well, that all changed Saturday at the Ogden crit. I think I got seven years worth of close calls in one race. In chronological order and in degree of potential harm, here's the fun.

#1 (risk of crashing - high, risk of injury - medium). A rider drifted into the guy directly in front of me and they both looked like they were going down. If they did, I would have been right on top of them. Somehow, the guy who was hit pulled it out and I was saved. I was plotting how I was going to fall to minimize the damage. I planned to land directly on top of the guy who caused the potential crash.

#2 (risk of crashing - high, risk of injury - low). I came into the first corner pretty hot on the inside of the group and came up on a guy going about 10 mph slower. I locked the wheels and slid sideways but kept it upright. I was going pretty slow by the time I slid, so a crash wouldn't have been too bad.

#3 (risk of crashing - very high, risk of injury - very high). Coming into the finishing straight late in the race, the same rider who drifted into the guy in front of me in #1, slammed into me while we were going about 30. I leaned into him, my handlebar hooked his top tube and I was sure I was going to hit the ground hard. However, somehow I managed to keep it up. After the race, 3 or 4 guys that were behind me each come up and said they have no idea how I didn't go down. They were glad I didn't because they would have been right on top of me.

#4 (risk of crashing - high, risk of injury - high). On the last lap coming out of the next to last corner, 3 or 4 guys went down hard in front of me. I was on Ken Louder's wheel and he was taken down as well. I hit him pretty hard, kind of rode over his rear wheel and came out of the pedals but stayed off the ground again.

I had planned to race the Cat 3 race in addition to the 45+, but decided I'd pushed my luck enough and just went for a ride around Ogden with Doug and Tanner. Thankfully, the crit season is now over for me.

Some good news, my Dugast tire I flatted Friday night appears to be holding air after adding more sealant. I'm going to test it out tomorrow to make sure. Saturday's race in Draper should be good fun. 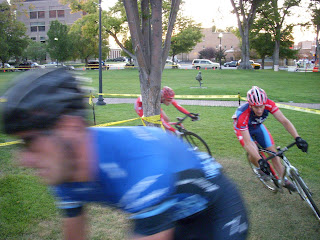 Did the Ogden Crit Cross last night. I had a good time and the course was kind of fun. It was in downtown Ogden and included pavement, a parking garage, grass, sidewalk, an isle in the outdoor amphitheater, a detour through a wood-chip playground and darkness. Lots of turns and only about 2:30 per lap.

I raced in the small A group and battled Kevin for the win in the "guys that don't race Pro MTB" subcategory. We were back and forth all race and it looked like we'd end in a sprint. However, on the last lap I hit the curb hard coming out of the playground and flatted. I got the run in for 8th place. The good news is they paid 1st, 2nd and 8th.

Chrispy and Bart rode together the entire race and Bart ended up winning. I was only lapped once by them, so I felt pretty good about my effort. It was good to see MK and Bob at the race. I haven't seen MK since cross Nationals last year.

Tanner and Doug did the B race and did well. Tanner was about 7th in a really good group.

We're off to race crits today. I'm signed up for two races. We'll see if I do them both.
Posted by Daren at 8:25 AM 2 comments:

So I rolled up to the start line at RMR last night for the last weekday crit of the year for me. I'm in a good mood, the weather's great and it looks like a good group. About 30 seconds before Gary gives the go, the guy next to me says "hey is your frame cracked?" I look down at my down tube just above the cable stop and I see watch looks like a scratch. At this point we're rolling off the line and all I can think about all race is when my frame will break. Fortunately, it didn't and I survived the entire season with all my skin.

A few of us examined my frame today and it looks like a paint scratch. However, I'll be making to trip over to the big S soon to make sure.
Posted by Daren at 8:21 PM No comments:

I've decided to venture on my own to create a blog separate from the GC Connection. I'm still part of the Connection, but I wanted to give my own thing a go. I actually plan to update this semi-regularly, but we'll see.

Cross season is hear and I'm a happy guy. Tanner, Doug and I all raced together for the first time Saturday at the Canyons. It was a short course with some unusual features but kind of fun. Tanner and I ended up battling for 4th and 5th after I flatted about half way through. It was cool to race the boy.

Bob and Kevin have called out all of us that finished well in the B's as sandbaggers. I was just trying to get a workout so whatever. Tanner and I will both be racing in Ogden Cross race Friday and the Crit Saturday as part of the Harvest Moon Festival. Should be a lot of fun. And yes, I'm planning to race the A's. My goal will be hold off getting lapped by Chrispy as long as possible.

Good times are a coming.

Oh yea, I'm also going to be a Father-in-law in the spring. Erin's getting married and I'm officially old.
Posted by Daren at 9:44 PM 3 comments: