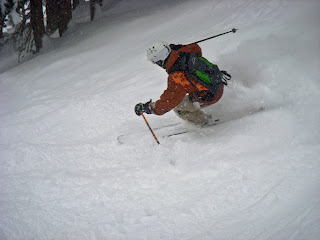 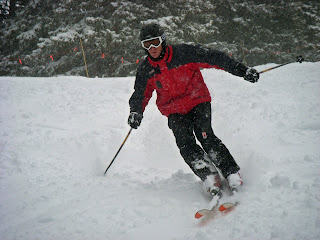 It was heavy and not particularly deep, but it was new and soft. I am a much happier person now after a good time on the mountain dodging trees.

(Side note, this picture was the last straw today. My jacket and pants are pushing 10 years old. As Tanner reminds my every time we go, my jacket is too big, looks dorky and is actually a snowmobile jacket. Well, no more. I went over to the Sports Authority's ski clearance and scored a killer deal on Mountain Hardware pants and a Salomon jacket. I've at least moved into the mid 2000's now.)

Let's see: very busy at work, crappy air in the valley, not enough snow in the mountains, no motivation to ride the trainer, no motivation to go to the gym. Must be the mid-winter blahs. I think some sun and fun will cure me. Too bad, it will be some time for both.

It hasn't been all bad. I've made it out on skate skis 3 times in the last week, got to ride with Doug, Tanner and some of the Canyon crew last Saturday, I made it up to Snowbasin for the OR on-snow demo yesterday and I'll be at OR tomorrow. The Easton snowshoes have been well received and we should get better placement next season. However, outdoor retailers are suffering through a terrible winter so the mood is kind of somber at the show.

Erin made it to the inauguration and had a great time. She scored some tickets from Sen. Bennett's office and was relatively close. She said all the waiting in the cold and fighting crowds was worth it.

Now I just need to find the time to ride some dirt. A mountain bike or moto will do. I'm not particular.
Posted by Daren at 9:48 PM No comments:

I've been a slacker on the blog front. I've been slammed at work since I got back from the trade show as well as busy with Porcupine team stuff. I've also tried to get back to working out some. Too much to do and not enough available time.

No camo bikes this year at the trade show. Too bad. There were lots of Bubba's standing in line for autographs of TV personalities, especially Lee and Tiffany (well, not so much for Lee). Country singers Blake Sheldon and Miranda Lambert where also wandering the show. Lambert had over-weight guys in camo stalking her. Kind of funny to watch.

I've been trying to get in some skate skiing this week, but so far no luck. Maybe tomorrow night. Somehow, I haven't made it to the gym this week as well. I think lack of motivation will do that to you. I think Saturday holds a long road ride for me. I've been off the road bike long enough that I'm actually looking forward to it. I'm sure a few road rides will cure me of that. I'll be longing for riding dirt again.

I have been able to ride the moto to work a couple of times this week. My need for speed has been satisfied. Nothing wakes you up in the morning like dodging cars on the freeway at 70 mph in 25 degree weather.

Finally, Erin officially became an intern in Ted Kennedy's office this week. She's been assigned to foreign relations and veteran's issues. Her main job is responding to mail from constituents. She's quickly learning that staffers make Washington go round. She gets one day a week to attend hearings, other events on the Hill or explore political landmarks. She was able to in for some of Hilary Clinton's confirmation hearing. I think I saw her arm in the background on TV. She's loving it so far.

Ashley's Birthday is Saturday so she's coming home for the weekend. She will be a 21 year old officaly adult. I'm looking forward to having her home for a couple of days.
Posted by Daren at 11:00 PM No comments:

I'm off to the annual Archery Trade Association trade show in Indianapolis tomorrow through Saturday. 4 days of travel, lots of standing, walking and over-eating. I get to talk with lots of Bubbas and hear endless hunting stories. It is interesting to see all the new products and get a feel of how the industry is doing. Hunting tends to be a little recession resistant, but no one really has any clue how this year will turn out. Maybe I'll see more camo bikes this year. If so, I'll post some pictures. Last year, Pacific (GT, Schwinn and other brands) was showing a camo bike with a rack for your bow. I wonder if anyone bought one. Maybe Todd Wells picked one up before he moving to Specialized this week.

The good news is going out of town allows me to delay working out for another week. I'll probably feel guilty enough to venture into the hotel workout room at some point. However, 10 minutes on a Lifecycle will cure me of that desire. Last year, it was warm enough to run outside. Hopefully, it will be cold this year and I'll lose that desire as well. Does it sound like I needed a good break from training this year. I think so.
Posted by Daren at 9:41 PM No comments:

Yesterday was a busy day of fun. It started with a few laps at Alta. T and I decided to take advantage of the new snow and blue skies. So did every other skier in the valley. There were as many cars at Snowbird and Alta as I've ever seen. We looked down at Collins and Wildcat from the road to see HUGE lines. We were going to head back down the canyon but took a look at Albian Basin before we turned around. Surprisingly, no lines. So we spent a couple hours on Sugarloaf and Supreme. Thankfully, everyone stayed on the Collins side and we charged hard with no waiting.

We next headed over to Wheeler for the Last Call "not too serious" cross race. On the way over to Wheeler, we spotted this commuter riding a cross bike. I couldn't tell if he was a businessman, professor or book salesman. In any case, he looked fast. 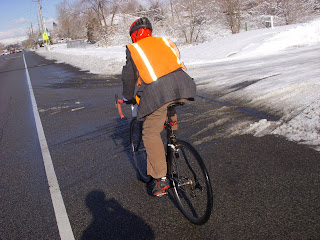 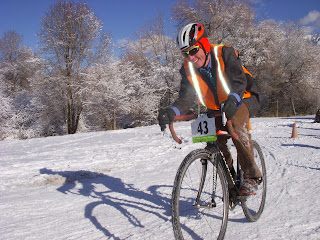 To my surprise, he turned into Wheeler and joined our race before heading to work. Impressive. 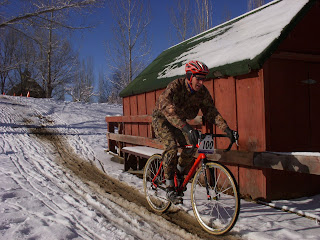 Sadly, Blaze Rippington was unable to make the race this year due to injury. However, his long lost cousin from Tennessee, Bubba Rippington, made an appearance. Maybe they both will make it next year.
The course was packed snow with ice in spots. It was fun just trying to make it around the course without hitting the ground. Racing a cross bike without going deep in the pain cave was a refreshingly new experience. 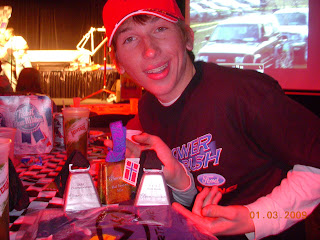 After the race, we were off to RMR for the NASCAR themed Utah CX party. It was a good time and the costumes didn't disappoint. Tanner walked away with 3 cowbell awards: two silvers for his 2nd's in the State Championship and overall points and a cool Norwegian bell for Most Improved. Thanks again to Matt, Jon, Steve and crew for putting on the series. I had a great time and made more friends. Can't ask for more than that. There were over 750 individuals who did at least one race this year. How cool is that? 5 years ago, there probably weren't 750 people in the valley who knew what cyclocross is.