It's been a while since I've updated the blog. I just haven't been motivated to spend the time writing. From scanning other blogs, I'm not alone. Maybe the heat has sucked the motivation out of all of us.

Here's some pictures from some recent highlights. 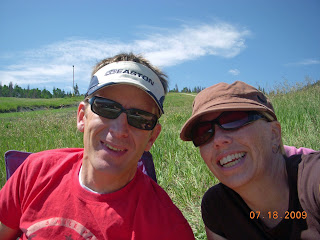 The whole family went to Granby Colorado for MTB Nationals. We had a great time together hanging out at the races. JoAnn and I spent lots of time sitting in the sun. 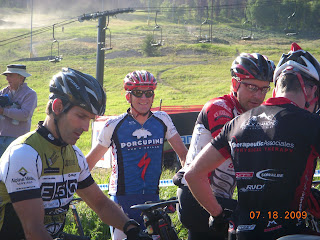 This was the high point of my race, the start. I could feel the congestion and head-cold coming on for days and my race lasted one lap. The course was long and hard so if you weren't on your game, you were just in the way. I wish I'd have felt good because long, hard courses are usually good for me. 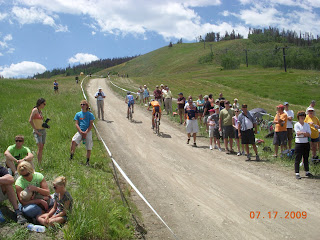 Here's Tanner going up the start hill on his last lap. It was like Little Stick, only steeper and shorter. Tanner had a very good race to finish 11th in the 17 - 18 Cat 1. He got as high as 7th but faded a bit the last two laps. The juniors are FAST and T was very competitive. He's looking forward to next year already and was happy with how things turned out. 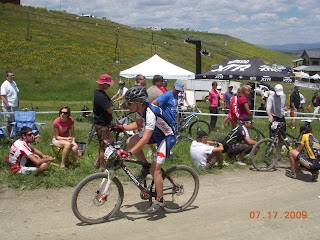 Tanner in the feed zone. 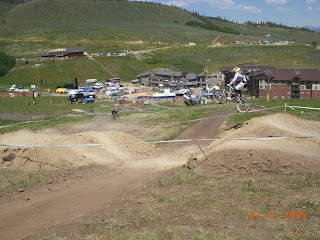 The DH guys are super skilled and very brave. The course had multiple 20+ foot gaps and three in a row that were 30, 35 and 40 footers. Check out this video. 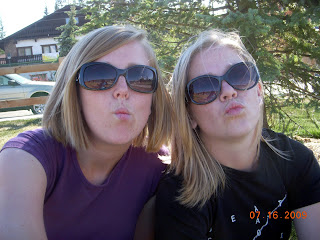 The girls were looking as Diva as ever in Colorado. 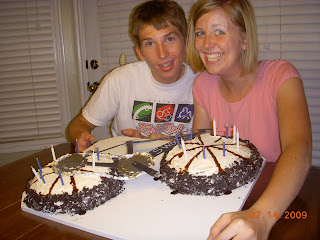 Before we left, Erin continued her long tradition of creative cakes for Tanner's birthday. It is an S-Works carbon hardtail. 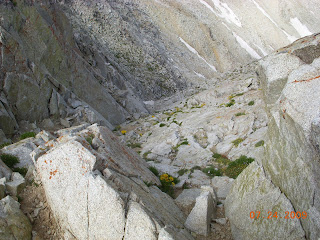 Doug and I hiked Phiefferhorn on Saturday. It was a good diversion from the bike and some good brotherly bonding. I still can't imagine how Jared skied this chute. A picture doesn't do it justice. 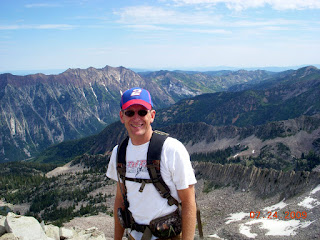 I'm on the top of the world. 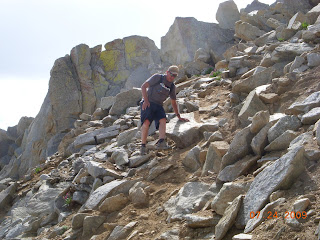 We dropped off Phief to Maybird lake. It was a little more exciting than we bargained for but we made it out alive.
I couldn't help but imagine ski lines. The pile of backcountry ski gear at my house is growing. I've been studying "Staying Alive in Avalanche Terrain" by Bruce Tremper and it's sobering. There's so much to learn and the consequences of a major mistake are huge. I thought I knew a little about reading avalanche terrain, but I know nothing.
I managed to get my motorcycle hung up on a semi-cliff in American Fork a few weeks ago. It was a long ordeal complete with cell phone batteries dying, Glen, JoAnn and Tanner searching in the dark, the moto nearly sliding into the abyss multiple time and a happy ending. Probably a blog post for another day.
I've taken a full week off the bike and hope my heath will let me start training for cross. We'll see. So far this year, the race season has been pretty much a bust for me. It's good I can race vicariously through Tanner.
I'll try to post more frequently than every 3 weeks but I won't promise.
Posted by Daren at 8:29 PM 2 comments:

After his recent crashes, I've been teasing Tanner a bit because I just don't crash on my MTB bike. In fact, I've only taken one hard crash in the last 15 years and that was around 10 years ago in the semi's of a NORBA National 35+ dual slalom (my first and last dual slalom adventure).

Well that all changed today. I took a nice high-speed dismount in American Fork. Glen, Chris Bingham, Tanner and I were having a great time dodging moto's on AF's beautiful trails. (Side note. Not sure when or why the AF single track was opened to motorcycles. Nearly all the trails are now fair game to motorcycles but fortunately not 4-wheelers. The moto guy in me likes the prospect of riding single track on the WRR. However, I'm just not sure AF is the place for this. The trails are already rutted in places and rougher.) Glen and I chased three KTM's off 157 down to South Fork and stayed on their tail the whole way. They were kind of surprised to see us right with them at the bottom.

Unfortunately on that descent, Chris caught a pedal and went down fairly hard. He somehow avoided injury but his frame was cracked. We made our way back to 157 and were getting ready to drop down to our cars at Dutch Hollow. One of the KTM's dropped in before us and Glen said, "come on Daren, let's catch him". A few minutes later, I came around a steep corner very fast, caught a pedal on a big rock and was quickly on my face sliding into some rocks and trees. The trees kept me from launching into a ravine with lots of sharp rocks.

After the initial shock of hitting the ground wore off, I was able to figure out all my limbs were attached and no bones were broken. Glen was quickly back up the trail to see if I was alive. He said it sounded really bad. In the end, I was able to ride away with some scrapes on my face, a scraped, bruised knee and a bruised rib. Considering the speed and the terrain, I'll smile and take it.

The worst part of the deal is Tanner is now giving me crap about crashing instead of the other way around. Hopefully, I won't have another one for a long time.
Posted by Daren at 4:35 PM 1 comment:

I'm on a pretty good roll with the mountain bike. Tanner and I got out in the dirt this morning in Draper. Up toward Shoreline then up Clarks to Jacobs Ladder, down Jacobs and Ghost Falls, back up North Ghost Falls and the new trail then back down Clarks. 15 miles of good fun.

Tomorrow it's on to American Fork for a long one with Glen. I haven't been in AF this year, so I'm looking forward to it. The holiday crowd will be much smaller on the AF trails.

With all the good dirt riding lately, I think I've ridden my road bike no more than twice in the few weeks. I'm strangely missing it a bit. However, it will have to wait. Too much fun to had on the MTB.

We're down to two weeks until MTB Nationals. I have zero expectations due to my lack of race fitness (a TT effort up Clarks today confirmed my lack of speed) but it will be fun watching Tanner battle in the 17-18 Cat 1. The whole family is going so it should be a good time.

Pretty quiet around the house this weekend. The girls stayed up north to go to Jackson with some friends. We'll probably take in some fireworks but that's about it. My big project is to change the tires on the moto. I pick up some more aggressive knobbies and 16 inch tire levers. I'm sure it will be a couple of hours of frustration but I want to give it a try.

The Tour kicks off tomorrow. Not sure if I'm excited or not. I'll probably warm up to it as it gets going. I'm hoping for a Contador / Armstrong battle. That would be fun. Hopefully, DZ will have a shot at winning the opening TT. However, Contador will likely win the TT. It seems more than odd to me that a guy who was a pure climber a few years ago can now beat the strong men on flat TT's.

Have a great Holiday weekend.
Posted by Daren at 11:47 AM No comments: