I have skied for years, but I didn't considered myself a true skier. I enjoyed spending time in the mountains and liked the feeling of floating in powder, but I could kind of take it or leave it. However, over the last couple of years that has all changed. I now think I am officially a skier. Here's some of the evidence:

I'll be back to being a bike racer soon enough, but here's a couple of shots from today in the mean time. 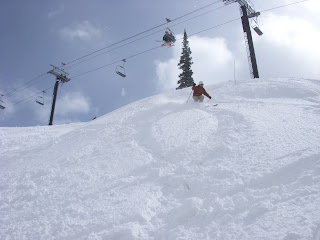 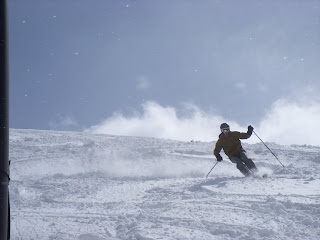 On a different note, I get to brag a little more about my daughter Erin. I've mentioned she's the Valedictorian for the School of Humanities, Arts and Social Science at USU this year. She and the 6 other Valedictorians made their pitches to speak at commencement today (Eric via teleconference from Sen. Bennett's office in DC). Erin was selected by the committee to be the student speaker at graduation. So it will be Sen. Bennett and Erin. Yep, I'm a proud papa.
Posted by Daren at 6:59 PM

You need to get your hands on Claim. As good or better than Steep.

Funny - I must have had Powder Mountain on my brain yesterday. I just read your post again and realized you said Snowbasin. I haven't skied there either.

In your opinion how do the Ogden Canyon resorts compare to Big & Little Cottonwood?

Send me a e-mail to dgc@eastontp.com

I'm still on the fence about this weekend. I have no fitness, so the bike race sounds hard. I know I can probably fake a flat 45+ RR though.
Another dump would tip the scales. I'm annoyed that work has kept me off the slopes Thur/Fri.